You’re at home and want a delicious lunch but your pantry and refrigerator are nearly bare. What do you do?

You have three options. 1. Go out for lunch (or, order in). Although, you’d probably have to drive, it can be expensive, and if you’re like me, you might become paralyzed by the myriad of choices. Plus, you never know what restaurants put in their food. 2. Pretend you’re on the TV cooking show “Chopped!“ and make lunch from mystery basket of ingredients. 3. Act like Caesar Cardini, the creator of the Caesar Salad, and do the best with what you have. With only scraps left in his kitchen he made a world-renowned salad.

I found myself in this situation and chose option three. Like Caesar’s restaurant, my pantry was bare, and I had to come up with something tasty with very few ingredients. To be clear, I did not make a Caesar salad…  However, I always have high-quality olive oil-packed jars of tuna fillets in my pantry. I recommend you do the same. They can be a game changer for quick, healthy, high-protein meals. As an example, see Synergy Pasta (Penne with Lemon, Olives and Tuna). There is a night and day difference between these tuna fillets and regular canned tuna. Skip the canned tuna. 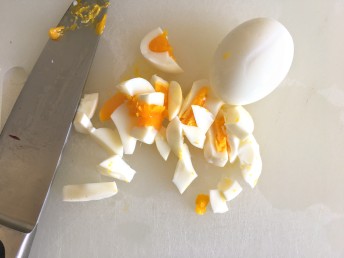 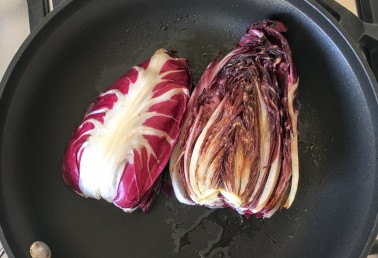 The tuna fillets were my anchor in which to build my lunch upon. I also (almost) always have eggs. I also had a leftover small head of radicchio tucked away in the vegetable crisper.

From these few, basic ingredients, I created an amazing quick lunch salad that I’ve been eating ever since. From my taste bud’s perspective, it’s got it all. It’s creamy from the eggs, crunchy from the radicchio, and there’s plenty umami from the tuna. Better yet, this salad dresses itself with the soft-boiled egg’s egg yolks and drizzle of olive oil.