Using high-quality ingredients, tuna salad can be a gourmet treat. Really! Here are two ways to enjoy it, including some variations.

One is traditional, one novel. The traditional is an open-faced sandwich, or tartine, using lightly toasted rustic bread. The second is tuna salad rolled in strips of roasted red bell pepper drizzled with olive oil, Mediterranean style.

My love of a good tuna salad was born long ago. Thirty years ago, I lived in New Mexico. Shortly before I moved to the east coast, my last meal was at Carlos’ Gospel Café in Santa Fe with my friend EK. I had a tuna sandwich on whole grain bread (I have good food memory, what can I say?). I remembered it because it included chopped pecans, which I found unusual.

I think a lot people’s memories of tuna salad conjure thoughts of soggy, overly mayonnaise’d sea-foody slop. That’s unfortunate. In this simple recipe, I’ve suggested only enough mayonnaise and mustard to “just” hold the salad together.

In a few of my other recipes, I recommend using tuna fillets in jars (not cans) packed in olive oil. This is very different than canned tuna packed in water, which can be dry and “fishy.”  I encourage you to upgrade, and then you, too, might join the choir and sing the praises of tuna salad! 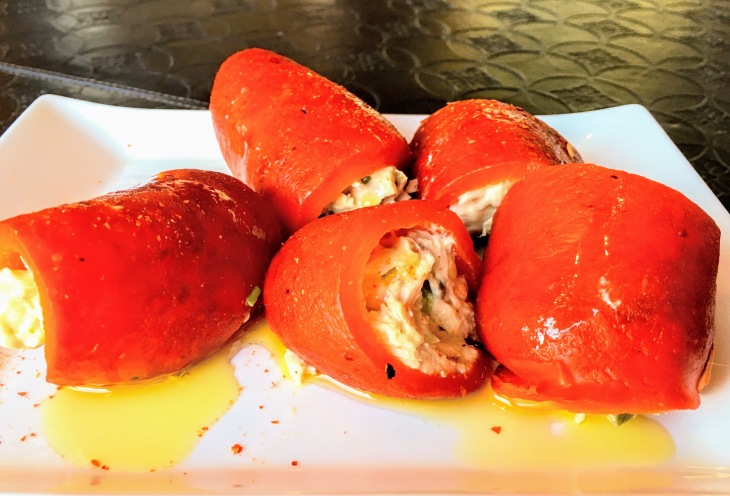